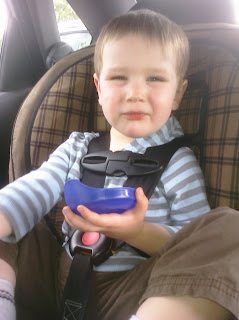 Ok, this boy is weird, but kinda like me, which might be the same statement. This morning, I went to grind some Starbucks coffee, and Henry wanted to help. I dropped a coffee bean, which Henry promptly snatched up as his prize.

He went to show it to Molly, and shortly after, he came running back to the kitchen, holding in between his thumb and fore-finger announcing, "I'm licking the coffee bean! It's yummy!"

He spent the next 20 or so minutes doing whatever 2 1/2 year olds do...and licking the coffee bean.

Later, Henry and I were at Target picking up some things when he asked for "something to drink." I told him that we hadn't brought anything, but I'd get him a drink when we got home. He then shouted, for all of Target to hear, "We're going to go home and drink orange juice and lick coffee beans!"

This kid is awesome.

Henry Alberto Alvarado is the son of Tim Alvarado and Molly Brennan. He was born on October 23, 2007 at 6:57pm. He got his name from his mom's mom's dad (Henry Tavery) and his dad's dad's dad (Alberto Alvarado) (one grandpa on each side).

Henry can be contacted via email at henry@timolly.net (he has some sort of fancy PDA thingy, and is generally pretty prompt with return emails---kids today. can't go anywhere without the mobile leash).

Send him an email and introduce yourself. He's a pretty busy guy, with his intense regime of napping, eating, crying, pooping, and snuggling, but, he'll do his best to reply in a timely manner.


Some Other Places to Check-out